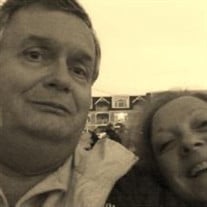 Robert A. Bradbury passed away at his residence surrounded by the love and comfort of his wife Susan A. Bradbury on Thursday, March 11, 2021. He was born in Frankfort Indiana on Saturday May 29, 1954 the son of Robert Leslie Bradbury and Betty Marie (nee Bladen) Bradbury. Bob was not a man of many words. In fact, he was very selective about what he spoke aloud. Still, he'd spend all the time necessary with someone who came to the door asking for a handout. He spent time teaching co-workers about work and life. In all things he lived to honor God; everything was done with an ear attuned to the prompting of the Spirit and an obedience to what he had learned in his sixty-six years about being a man of God. Bob became an ordained minister later in life but according to his testimony, his mother always knew he would be a minister. There is a photo of him as a toddler riding his rocking horse and holding a bible in one hand. Bob is an Indiana boy, survived by his mother, Betty M. (nee Bladen) Bradbury; three sons Robert, Kevin, and Sean, and a step-son, Eric. Bob was the first born and has three siblings Suzanne Bradley, Randy Bradbury and Daryl Bradbury Hobbs, and four grandsons Orion, Owen, Anderson, and David, with the first little girl due in a few weeks. And of course his loving and devoted wife Susan A. (nee Miller) Bradbury. Bob earned a Master's degree in Fire Safety and had many certifications and licenses to work throughout Western New York as a Master Electrician. He worked for Elwood Fire Protection to protect commercial properties throughout the state. He previously was a volunteer Firefighter in Princeton, W. VA with his son, Robert. Bob served on the Boards of First Universal Christian Church, The Riviera Theater in Tonawanda, and Kaisertown Friends Association, a neighborhood community action group. Bob loved to play the theater organ at the Riviera Theater and his Hammond organ in the church. He and Sue also loved trains and had a collection of model trains. They also shared a love for the Harry Potter novels and attended many of the midnight movie premieres together. Bob was an avid reader his whole life. As a husband, Bob loved his wife and showed it in a million daily actions. His love was demonstrated as his dedication to their church and he spent countless hours creating a home in the parsonage; it became Bob and Sue's place of comfort and peace. People felt it when they entered. It was the only place he wanted to be as his days dwindled and Sue made sure that was possible. They loved to garden together. He always held Sue's hand as they walked through a parking lot and he'd sing songs to her as she washed dishes. He refused to eat supper until she came home from work, no matter how late it was. He prayed for her when she was sick and needed healing. They said grace together before each meal. And when Sue found it difficult to put spoken words to prayers in those last days, he brought comfort to her again, saying God knows what's in our hearts. There was nothing Bob loved more than being in church. He was a man after God's heart. Perhaps the best thing we can do to honor the life of this man is to hold his uncomplicated way of living in our heart. We know this- love lives on. Always. The Bradbury family will gather privately in the church Bob and Sue loved so much, the First Universal Christian Church to honor and celebrate Reverend Bradbury's life. There will be no prior visitation or public service due to the restrictions of the Corona Virus. Family and friends are cordially invited to leave a message of condolence, share a favorite story or memory of Bob here on his tribute page. Expressions of sympathy may be directed to Hospice Buffalo 225 Como Park Boulevard Cheektowaga, New York 14227. On the memo portion of your check please write Robert A. Bradbury. The courtesy of no flowers is requested. For additional information you may call the Kevin M. Mason Funeral Home at (716) 362-0199. Kevin M. Mason is caring for Robert and his family. Kevin M. Mason Funeral Home 154 Weimar Street Buffalo New York 14206. (716) 362-0199 Fax: (716) 462-5355. www.kevinmmasonfuneralhome.com Email: [email protected]

Robert A. Bradbury passed away at his residence surrounded by the love and comfort of his wife Susan A. Bradbury on Thursday, March 11, 2021. He was born in Frankfort Indiana on Saturday May 29, 1954 the son of Robert Leslie Bradbury and Betty... View Obituary & Service Information

The family of Reverand Robert A. Bradbury created this Life Tributes page to make it easy to share your memories.

Robert A. Bradbury passed away at his residence surrounded by...

A comforting word from you means a lot.

Send flowers to the Bradbury family.